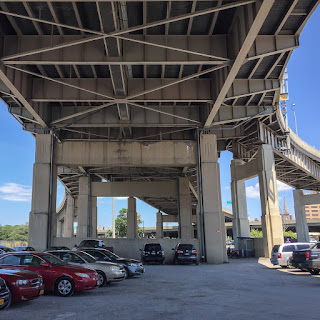 An impressive bridge construction though downtown Buffalo (notice three ramps above) that extends over the Buffalo river and various harbor canals. All bridges have some beauty to them from a distance, but this one has been controversial for years. Even though you can move below the bridges to Lake Erie it still is a barrier with noise and visual distraction from the city center.

Providing major arterials in crowded urban centers is a problem.

There has been some discussion of tunneling Route 5 (New York's major East/West non-toll route), but the cost and political will is nowhere to be found. Fortunately over the last few years there has been significant work done to make the waterfront accessible and enjoyable for the public.