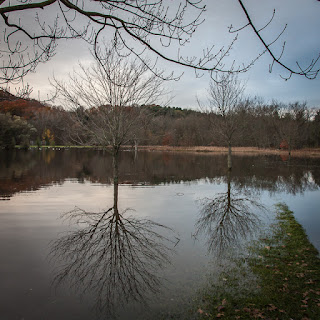 Ellison park is often flooded during heavy rain weather, and after Sandy, indeed it has flooded again. You can see on the lower right side of the image the edge of the park road where it descends below the surface.

The two trees are reflected providing nearly perfect inverted images. I suppose it is not healthy for trees to be flooded like this, but it will not last long.

As a side note, I have succeeded in posting 19 pictures in the month of October, a record for me. Not sure why that is, and certainly no reason for celebration, but I like that I have been able to capture pictures in a nearly daily cadence.  Perhaps my standards have gotten lower... these last two posts are pretty gloomy, but we photograph what we find, and gloom and rain has the theme of the week.
Posted by John D. Linn at 9:57 PM 3 comments: 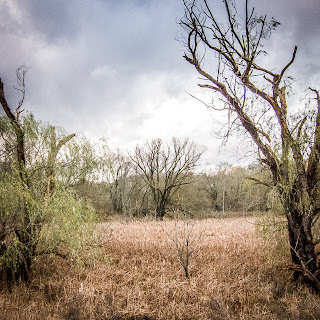 Sandy was kinder to us than to our friends near the coast, but is is not over yet. A lull perhaps, as the remnants are still tracking toward us in Western New York. More rain no doubt, and high winds, but a kinder, gentler Sandy we hope.
Posted by John D. Linn at 10:40 PM 2 comments: 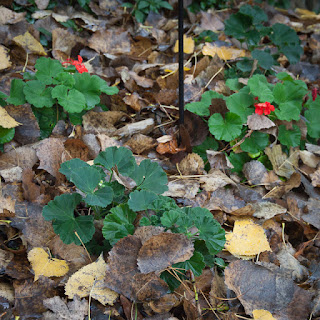 The golds and oranges of autumn do not last long once they are on the ground. Time and rain take their toll and soon we are left with browns and grays that have their own beauty, but none of the flash.

At least the geraniums are still looking healthy and even have a few modest blooms, but soon they too will retire, along with the season
Posted by John D. Linn at 5:59 PM No comments: 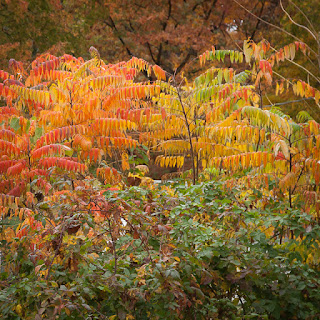 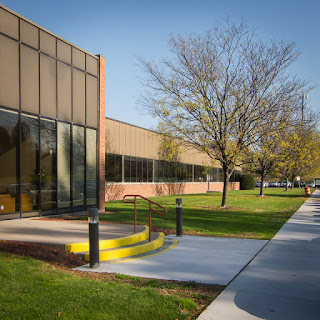 This is the building where I work, but it now has nothing to do with cameras or photography. In fact I have not found one person who works here that is aware of the buildings history. It was constructed in 1957 for what has been said was the only great United States camera company.

Sure there were a lot of cameras built in the US of A, and some were pretty good, but most were simple snap-shot devices. The cameras built here were iconic and nearly universally used by the press and comercial photographers around the world. From the early 1900's to the mid 1970's they were the cameras that said "I am a serious photographer".

Of course by the time most of us were getting into photography (even us old timers) this brand was on the downward slope and, although effort was made, they were not successful in advancing the technology in a way that retained the market. New offerings from Germany and later Japan left them in the dust.

If you have not guessed by now the company name was Graflex. The Speed Graphic, and its progeny, were THE cameras of their era.

Most people think of Eastman Kodak when they think about photography and Rochester NY, but there were over a dozen camera, film, and optical companies in the city during the early part of the century. Kodak did own Graflex for a few years, but for the most part they were separate entities.

When Graflex moved into this building 50 years ago they surely did not know that their name would be nearly forgotten, yet their building would live on.
Posted by John D. Linn at 10:04 PM 5 comments: 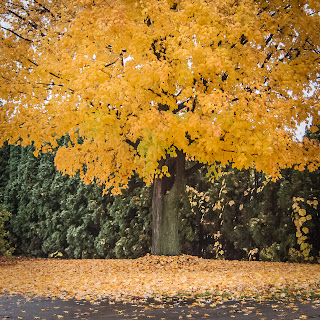 There is no question that the autumnal coloring of trees is a sight to be enjoyed, but what is sometimes also spectacular is the resulting carpeting of the turf around the trunk. When you consider the volume of the tree limb ball you realize that once it is compressed to the essentially flat surface below, the layer of leaves can become more dense than the tree ever was. And that results in a thick carpet, assuming there is not a lot of wind or an enthusiastic homeowner with rake in hand.
Posted by John D. Linn at 9:09 PM 2 comments: 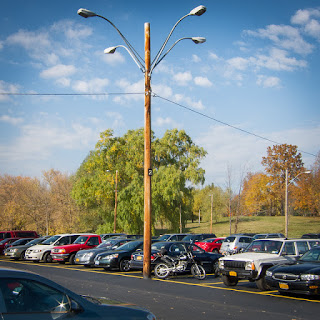 If you take a close look (as always, click to make bigger) you can see that the pole has been marked as #2.  It is pretty small, and pretty high, and pretty hard to see... but there must be a reason for the identification.

Perhaps to help people remember what row they parked in, but there is really not that many rows.

Or maybe it is for maintenance purposes? "Joe, you need to replace the bulb on the north side of pole number 2."
Posted by John D. Linn at 8:04 PM 2 comments: 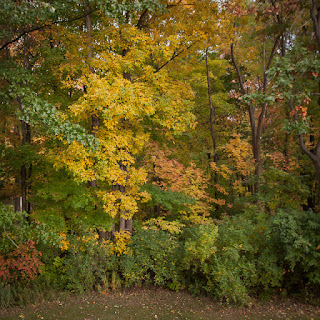 I am fortunate. This is what I see when I look our my back window. We are lucky to have trees for fresh green in the spring, shade in summer, snowy branches in the winter, and dreamy color in the autumn.

I may have posted a similar picture in the past, but each year I am still taken by the view and feel a need to capture the multi-color display.
Posted by John D. Linn at 9:32 PM 2 comments: 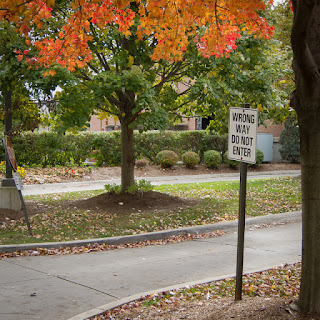 Although not every tree turns bright colors, at this time of year where I live, it is difficult to avoid flaming canopies or splashes of color in any direction you happen to gaze.  Even if it is the wrong way.
Posted by John D. Linn at 5:56 PM 2 comments: 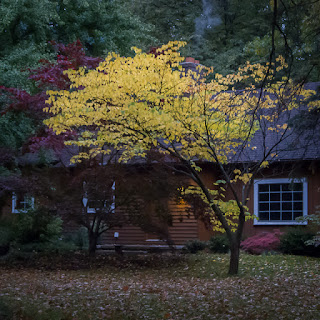 With the days getting shorter, the drive to work is less bright, especially on a cold and drizzly morning. However at times an unexpected vision can appear, sometimes almost as if by magic.
Posted by John D. Linn at 10:23 PM 2 comments: 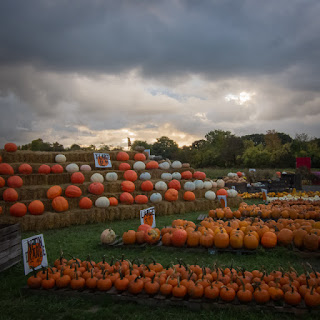 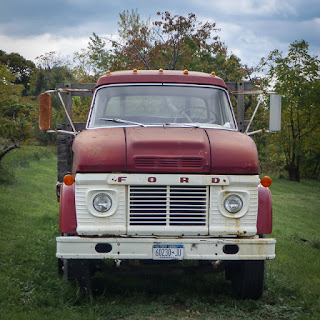 I get the feeling that this truck has seen a lot of hard work over the years.
Posted by John D. Linn at 10:37 PM 2 comments: 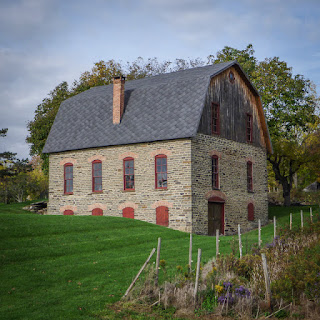 They don't make them like this anymore. Maybe they never did.

The construction looks like it would last a long time, and I guess this picture is the proof that it can... but good maintenance has contributed greatly I am sure.
Posted by John D. Linn at 9:04 PM 2 comments: 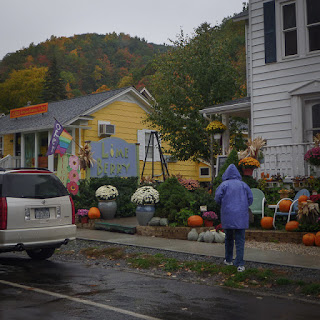 Poking around Hammondsport in the rain.
Posted by John D. Linn at 4:54 PM 2 comments: 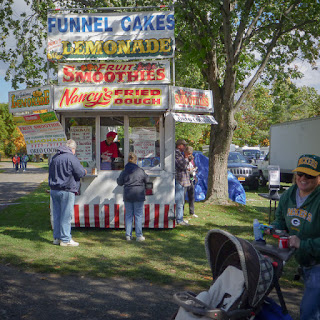 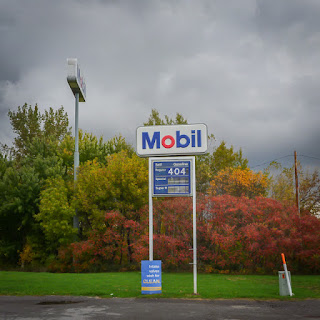 Mark, this one's for you.

In the off chance that you see this, do not take it wrong.  I am not lampooning you, and not attempting to "do" you. There is a little gentle humor attempted here. I feel the need to explain this because some of my posts have been tung-in-cheek, but it appears that not everyone understands the jest and instead takes me at face value.

So back to the picture... this my take on the interplay of man and nature and how they can create the unexpected expression of what is real.  The end result can be interesting on several levels but of course that is not to say that my effort has obtained the objective.
Posted by John D. Linn at 10:20 AM 1 comment: 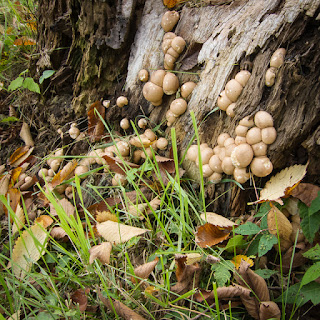 At least I think these are mushrooms. I did not put them on my salad because with a "fleshy, spore-bearing fruiting body of a fungus" you never know... or at least I never know.
Posted by John D. Linn at 9:37 PM 1 comment:

How am I doing? 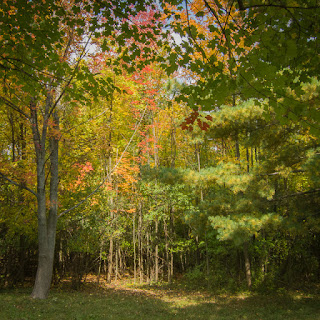 The fashion this season, in some circles, seems to be autumn photography with subtle inclusion of color and without pumped up saturation. 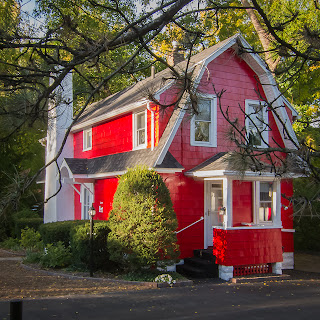 Or should I say, really red house.

Yes, this is the most saturated red imaginable, and the paint is even shinny. No saturation boost done in photo processing... and even a bit of vibrance reduced.