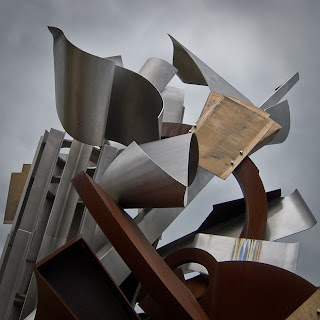 The famous Albert Paley sculpture that stands at the main entry point into the Rochester Institute of Technology (RIT) campus. This angle makes it look kinda like a bunch of junk.
Here is a more conventional photo. Maybe it still looks like a pile of junk?

But I do like it. And it is interesting to view from many angles. And it is BIG. The choice of different metals have weathered in different ways over the few years it has been installed. And that makes it even more interesting. 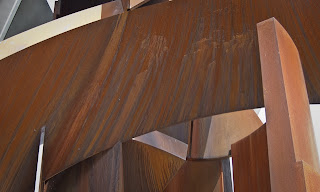 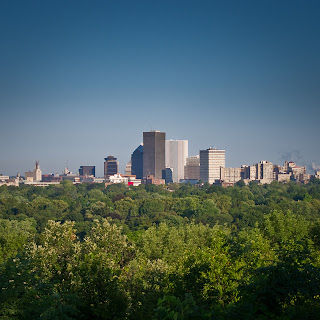 Well actually my town is several miles to the northeast... in Webster.

But this is the Rochester metro skyline from Cobbs Hill.  It's not a big city and in fact from this vantage it looks rather small.  Looking over the green trees it appears that Rochester is at the edge of the forest, but it is actually bordered by tree shaded neighborhoods.

Not a bad place to live, especially on a bright summer morning like this.
Posted by John D. Linn at 10:39 PM 1 comment: 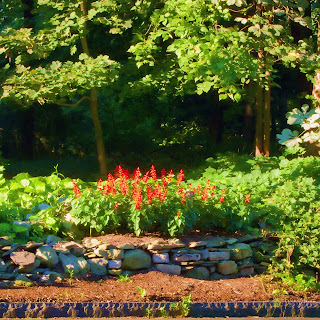 Somehow during the early morning the new light of the day seems to make everything look new and fresh.  The low sun angle and shadows can make the ordinary look special.  It is my favorite time of the day.
Posted by John D. Linn at 10:00 PM No comments: 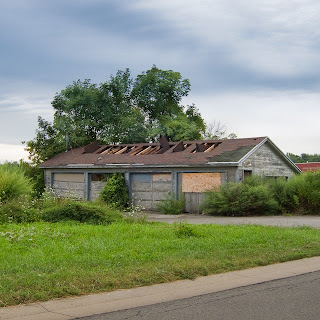 Not sure what's going on here.  This old garage is about ready to fall down, but someone has decided to cut holes in the roof.  New skylights? 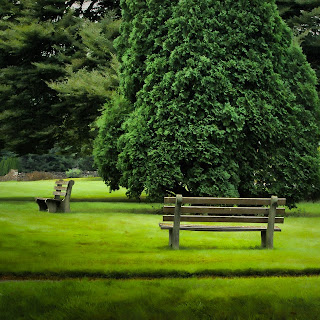 Inviting but vacant.
Waiting and patient.
A pause on the journey.
Passed by, in the hurry.
Posted by John D. Linn at 9:36 PM 1 comment: 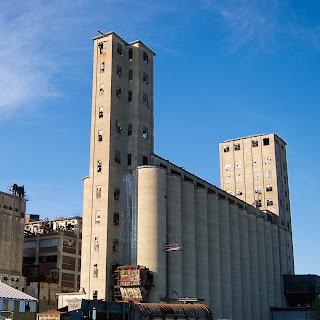 Rochester was known as the Flour City until 1850. Wheat from the Genesee valley made its way to the city to be turned into baking ingredients needed by rapidly growing eastern citys like New York. The Erie canal made inexpensive transportation possible.

Soon the demand for more wheat shifted the productive fields westward, to Ohio, Illinois and other midwest areas. The wheat could travel through the Great Lakes in large ships, but once at the easten end of Lake Erie it hit the barrier of Niagra Falls and the relatively small width and depth of the Erie Canal. This, along with the development of railroads, meant that Buffalo had the opprotunity to become the new Flour City. Here, not only was the wheat milled, but it was also stored in the silos to insure product through the long winter.

So here we see a grain elevator and mill on the Buffalo waterfront. But it does not look too productive. What changed in 1930's was the opening of the Welland Canal and St. Lawrence Seaway, which allowed the large grain carrying ships to bypass Niagara.

Still some elevators and mills do operate in Buffalo,, most notably General Mills and Gold Medal Flour. But this is only a shadow of the golden days during the 1920's when dozens of elevators and mills operated and employed thousands.
Posted by John D. Linn at 9:11 AM No comments: