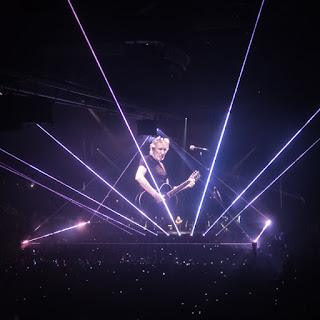 I have been fortunate to see a few of my favorites this year in concert, starting with Santana in Canandaigua, then U2 in Buffalo, and now Roger Waters in Toronto. Waters was key member of Pink Floyd and responsible for much of the iconic music of their prime years. Pink Floyd has continued without him but Waters has created some great music since his departure. His concert playlist spanned his full career with powerful performances, much of which took on a political tone repurposing some of his music to criticize the current USA leadership under Donald Trump (a large floating pig circled the arena and with an image of Trump, eyes replaced with dollar signs, was only one example).

Staging and effects were quite spectacular, with a huge brick building suddenly appearing over the full length of the hockey field, which included puffing smokestacks (an image from one of the albums).

I played around a bit with creating an animated GIF... hope the flashing does not drive you crazy.