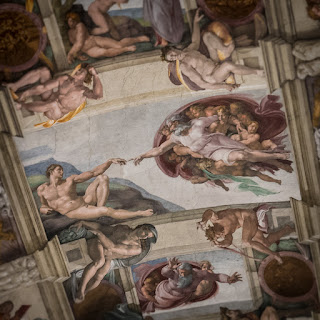 Entering the Sistine Chapel the uniformed attendant kept repeating the phrase "no photo!"... sometime with emphasis as someone came into the space and immediately tilted their cell-phone toward the ceiling... leaning way back to take it all in.  And I think that was the issue. People would stop in their tracks and practically tip-over to photograph the famous ceiling frescos, and block the anxious crowd behind them.

We were lucky to find a way to squeeze a seat on the benches along the wall. Not feeling defeated I pointed my camera from my lap and took multiple covert pictures thinking at at least some of them might be framed and usable.

So, feeling only a bit guilty, here are a few images that I captured of Michelangelo's masterwork.