Where I used to work 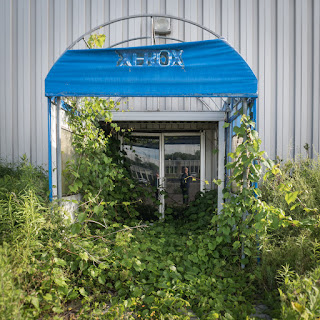 I am going to be retiring in a few months so I think it is natural that I reflect back on my career. I had almost 30 years at Xerox, about 20 of them working in this building. It is a workplace no more and has not been occupied for maybe 10 years. Nature has a way of taking back anything that is abandoned.

Rochester's former two big employers (Xerox and Kodak) both have had tough times. They were the Google and Apple of their heyday. Kodak filed and is now out of bankruptcy but a mere shadow of it's former self. Xerox has done a bit better but is now in the process of splitting apart and maybe the Xerox name will not survive.

I have been fortunate over the last 15 years to have had two pretty good jobs since Xerox.

And so it goes... the natural flow of ups, downs and transitions.
Posted by John D. Linn at 8:25 AM